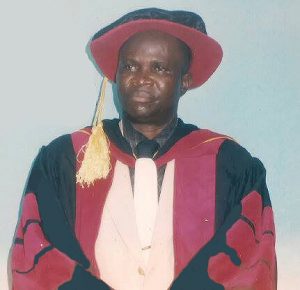 “…Some are born great, some achieve greatness, and some…”- William Shakespeare, Twelfth Night.

The above saying aptly sums up the personage of Nze (Dr.) Pius Chinedum Ogbonnia Okoh. The late Dr. Okoh (fondly called “P.C” by his admirers) was born into the great family of the late Elder G.U. Okoh (“Idume Ekwukwo”) as the 24th child on 10th May 1950 at Ezi Idume, Ngodo Village, Afikpo North Local Government Area of Ebonyi State, Nigeria. Unlike many who would settle with greatness they were born into, P.C., made quite conscious effort and carved a niche of greatness for himself. Quite early in life, his hard work and diligence earned him the love of his parents and his siblings, one for which he was called “Ololo” (short for “oloru ihe loru enyi” i.e he that swallowed what swallowed an elephant).

The late Dr. Okoh started his primary education at Amuro/Mgbom Primary School Afikpo in 1957 and left in 1962 to live with his maternal uncle, Chief Donald Okorie Egwu (Abaeme) at Nigercem, Nkalagu where he completed his primary education in 1963 at St. Charles Primary School, Nigercem (now Azuzuru State School) Nkalagu, Ebonyi State. The young P.C., thereafter, proceeded to Government Technical College, Abakaliki, as one of the pioneer students in 1965.

After the death of his parents in 1968, Dr. Okoh faced challenges fending for himself and decided to embark on a spiritual sojourn to the Holy Ghost Catholic Cathedral, Ogbete, Enugu where he made a covenant to serve God forever if He answered his prayers. P.C. Okoh left for Abakaliki to work as Secretary/Typist in the law firm of Barr. Umezuoke in 1971 and also enrolled with the Rapid Results College, London for his WASCE/City and Guilds. He thereafter obtained the Higher National Diploma (HND) in Business Education.

Subsequently, Dr P.C. Okoh started a typing school at 11B Ogoja Road/Arochukwu Lane, Abakaliki. This secretarial business later evolved into Glasgow Commercial Institue, Abakaliki with branches in Effium, Ikwo and Afikpo. These branches were all later merged in a single location to become the Holy Ghost Secondary School in 1984, which has been rated among the best schools not only in the South East but Nigeria in general. The schools have also grown to give birth to nursery and primary schools under the name of Holy Ghost Foundation Schools, Abakaliki.

Dr. P.C. Okoh has left indelible mark in the sands of time. He was of many parts; charity personified, human resource developer, a lover and supporter of sports. He was also s philanthropist who never slept while people around him languished in pain. Whilst pecuniary gains prompted many into establishing private institutions of learning, P.C. was among the few who went into this venture driven by the passion to provide “holistic education for the valued child”.

The sterling but redoubtable leadership qualities of Dr. Okoh never  received a better appreciation than his overwhelming election in 2012 as the National President of the National Association of Proprietors of Private Schools (NAPPS), a position he held until his death. As National President of the NAPPS, Dr. Okoh infused unprecedented peace and harmony thereby repositioning the Association as a cardinal stakeholder in the Nigerian education sector.

As a practising Christian, Dr. Okoh, among other things dedicated the yearly Pentecost Sunday (Holy Ghost Service) as a special day of thanksgiving to provide financial and material support to the less privileged, orphans, the aged and the sick in different care homes and centres. For this great legend, the Serenity Prayer, “God grant me the serenity to accept the things I cannot change, courage to change the things I can and wisdom to know the difference” was the summary of his response to life’s challenges.